Home > Human Rights > Children's Rights in the UK and Abroad 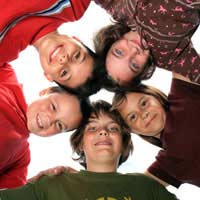 Children's rights, or the rights due to every young person 17 years of age or younger, unfortunately need great protection under both national and international law. Sadly these rights have had to be enumerated in legal documents rather than being inherently observed by society, but today there is legal protection for children around the world. Unfortunately it can still be a daily struggle for children's rights to be observed a respected, but today there are many organisations fighting for children's rights both at home and abroad - and much that you can do to support these organisations and the protect the rights of children worldwide.

The United Nations Convention on the Rights of the Child (UNCRC) is the one international standard for the protection of children's rights around the world. This Convention was adopted by the United Nations in 1989, and came into force in 1992. The United Kingdom ratified this document in 1991, meaning that the government of the United Kingdom has been responsible for upholding the terms of this Convention in the United Kingdom since then. This document gives children over 40 specific social, economic, cultural/civil and political rights, and also contains information on how governments should enumerate and protect these rights. Today all but two eligible countries have ratified the Convention - the United States of America and Somalia. Responsibility for ensuring that countries follow the UNCRC rests with the Committee for the Rights of the Child, made up of international experts on the subject.

UNICEF is the international children's charity that works for the implementation and protection of children's rights around the world. This organisation focuses on five major areas of concern. Child survival and development, basic education and gender equality and HIV/AIDS and children are all areas in which UNICEF makes a difference, as are child protection and policy advocacy and partnerships which it often works with at the organisational level. In order to monitor these areas, UNICEF engages in fundraising, research, purchasing and delivering supplies for children, providing life skills education, establishing health and development programmes and much more. In the United Kingdom, the Children's Rights Alliance for England, CROA - Children's Rights Officers and Advocates, Barnardo's, Childhope UK and Save the Children UK all work towards protecting children and children's rights. To become more involved with the fight for children's rights either at home or abroad, contact a registered children's charity and find out more about how you can make a difference.