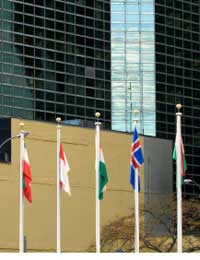 Human rights are universal, or due to everyone regardless of age, race, sex, religion, location, or any other factor. This means that around the world it is agreed that every human being is due the rights to, among other things, life, free speech, freedom of religion/worship, freedom from torture or inhumane treatment, access to education and work, access to an adequate standard of living and housing, access to fair trials and the ability to participate in social, cultural and political activities.

The Universal Declaration of Human Rights (UDHR) - which was passed unanimously by the United Nations in December 1948. This document was reaffirmed, again unanimously, at the Vienna World Conference on Human Rights in 1993.

In Europe, the European Convention on Human Rights (ECHR) was adopted by the Council of Europe in 1950. Here in the United Kingdom, the Human Rights Act of 1998 was adopted to reinforce the UK’s commitment to human rights and is in force in England, Wales and Northern Ireland. The Scotland Act 1998 guarantees that the Scottish Executive and Scottish Parliament can not do anything contrary to the European Convention on Human Rights.

Those cases which allege that there has been a breach of human rights as guaranteed by international treaty or national law are usually known as “human rights cases”. In countries which have specific human rights legislation, these cases can be taken to the national courts as stipulated in the country’s own laws. In the United Kingdom, for example, the Human Rights Act of 1998 makes it possible for cases concerning human rights to be heard in the UK.

The European Court of Human Rights

Larger courts dedicated to only human rights issues also exist. The European Court of Human Rights in Strasbourg, for example, hears cases from countries which ratified the European Convention on Human Rights. The International Criminal Court, which is governed by the Rome Statute signed by 105 countries (including the United Kingdom), also exists as a court of last resort to try those accused of genocide, crimes against humanity and war crimes. The International Criminal Court will not, however, hear cases that are being or have been investigated and/or prosecuted in an individual country unless it is evident that those proceedings were not sincere and genuine.

Unfortunately, treaties, legislation and the courts can not always protect human rights as they should because they can only put in writing what is deemed acceptable and what is not – they need others with the motivation and means to enforce them. Though it is largely up to individual countries to defend the human rights of their own citizens, and sometimes it is the role of international peacekeeping forces to do so in areas of conflict, some organisations have come together observe, document and highlight breaches of human rights around the world.

Human Rights and the Law
Share Your Story, Join the Discussion or Seek Advice..
Iwas attacked in my home by another resident who lives in my hostel. The hostel I live at is supported specifically aimed at homeless vulnerable women. I am considered vulnerable due to growing up in care and because I have a mental health issue. I was placed in this accommodation and done well and had moved on to the second stage. I asked a neighbour to be a bit quieter as she was on my landing shouting and speaking very loudly with another neighbour. I was attacked shortly. Then I called the police and was denied any help because they felt it was a internal matter for the staff to deal with. The staff decided me the victim should livein habitual rooms while the perpetrator of my attack stays in the comfort of our shared accommodation. I was left destitute for 2-4 days to such amenities as food water, clean clothing, my money, shower and I was also unable to brush my teeth. I felt really mistreated. I feel I am often in situations like this and its really effecting my mental health. I have complaint and the staff and management will ignore me and the police will not intervene because its not their job.
Taylor - 11-Aug-15 @ 12:57 AM
I am trying to find a way to go on a DDRS (drink drive rehab scheme) course having not been offered it by the Sheriff in court. I believe having looked at the statistics provided by the Government that Kilmarnock court are not offering this to all first time offenders, just who the Sheriff feels like. Most courts in the UK offer the course to everyone. Therefore it is a post code lottery too. Please can you help, I have been through the courts complaints procedure and the SPSO and been told to seek legal advice. I feel the court is not following procedures and policies set out by the Government. Kind regards Caroline
Caz - 28-May-15 @ 1:12 PM
Title:
(never shown)
Firstname:
(never shown)
Surname:
(never shown)
Email:
(never shown)
Nickname:
(shown)
Comment:
Validate: