Racism in the Classroom 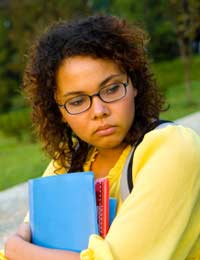 Racism is the unfair treatment of, or outright hatred of, individuals of a certain race. Sometimes racism or racial discrimination is described at the organisational level, as a system or policy of treating one (or multiple) races unfairly. Racism may be practiced to benefit one race, or simply because one or more other races are thought to be inferior. Unfortunately, racism may still exist in classrooms across the United Kingdom.

Racism and the Law

The Race Relations Act 1976 and all of its amendments and extensions protect individuals from being discriminated against on the grounds of colour, race, nationality, religious beliefs or ethnicity. This Act does not distinguish between whether racist practices were done on purpose or not, it is concerned only with the fact that racial discrimination occurred. This Act covers discrimination faced in employment, education and more.

Racism can be experienced in four main ways. Direct discrimination is deliberate and obvious. Indirect discrimination occurs when practices or policies disadvantage one or more racial groups. Harassment occurs when an environment is allowed to become hostile for members of a certain race. Finally, victimisation occurs when someone has complained about racism and is then treated less fairly than others. These actions are all in breach of the Race Relations Act 1976 and its amendments and extensions. In terms of education, racism can be experienced by a pupil of an institution as well as by an individual seeking entrance to a certain institution.

Racist Bullying By Other Pupils

Racist bullying by other pupils can take many forms, from hurtful comments to physical attacks. In order to stop such bullying, students should first familiarise themselves with their school’s anti-bullying policy. Then students should record instances of bullying in a diary, including what happened and who was involved, and tell a trusted adult about the incidents. Any proof of bullying, such as defaced property or hurtful electronic communications, should be saved. Online abuse, whether via text messages, emails, instant messages, websites or ‘blogs, should also be saved. When ready, the student and his or her parents should confront the school and make a formal complaint according to the school’s procedures and policies.

Though despicable, bullying by teachers may occur. Teachers may make degrading comments about a student, engage in unwanted or hostile physical contact with a student, make unwanted or suggestive sexual contact with a student, say inappropriate or lewd things to or about a student, or even suggest to a student that his or her grade depends on something other than his or her studies. If a student feels that they are being subjected to racist bullying or discrimination by a teacher, the student should ask for a meeting with both the teacher and the department head. Parents may want to be at this meeting as well. If it is believed that nothing has come from the meeting then a formal complaint should be filed with the school. In the meantime, the student should discuss transfer options as a way of being removed from that teacher’s class. It may not be fair that the student has to leave, but safety should be the first priority.

Racism is disgusting in all forms, but unfortunately it does still exist. Individuals who encounter racism in the classroom should be prepared to document and report this type of bullying. If the educational institution itself does not respond to these complaints then it might be wise to seek professional, legal advice about the situation.

Fighting Racism in the Community
Share Your Story, Join the Discussion or Seek Advice..
Racism is institutionalized in some countries particularly Ireland while there own people leave the country to live and work in other countries - migrants in Ireland are higly discriminated on. A case was reported of a creche where the white Irish kids were handed easter eggs and the brown Irish kids weren't. Racism and discrimination are the norm in Ireland. A black surgeon and a white drug addict were at the train station waiting for the train and the White drug addict is already feeling superior to the brown surgeon. A qualified black applicant will not be give a job while a white young living cert. young school leaver will be given the same job. It is weird and shocling in the 21st century.
LOMO - 25-Apr-14 @ 12:44 PM
Title:
(never shown)
Firstname:
(never shown)
Surname:
(never shown)
Email:
(never shown)
Nickname:
(shown)
Comment:
Validate: