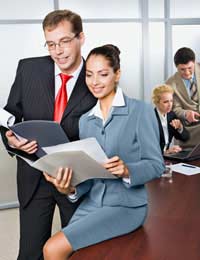 Sexism, the belief that one sex/gender is inherently better than the other, is a terrible attitude that sadly still survives in our society. Though discrimination based on sex is illegal in the United Kingdom many private citizens still harbour sexism in their thoughts, attitudes and actions. Today there is much that can be done to confront sexism. Confronting an individual (when it is safe to do so), reporting discrimination and educating others are all steps that anyone can take to help confront sexism.

Many individuals will make discriminatory remarks or jokes about individuals of the other sex/gender because they are ignorant, but often such asides and jokes seem harmless and may not truly represent an individual’s beliefs so much as they are just meant to get a laugh. Unfortunately even something like seems like harmless fun can be painful to others and have wide reaching consequences. If it is safe to do so, confront such individuals with a short, no-nonsense approach such as by saying “I can’t believe you just said that” or “What a disgusting sentiment”. Such a stark reminder that sexism is intolerable may be enough to shock the individual into reconsidering his or her words, or to shock others into vocal support of your statement. Whether or not you convince anyone, however, it is often best to leave a conversation after making your point. Not only will this help keep you safe from verbal or physical retaliation but it will help you make the point that you want nothing more to do with that individual.

If you see sex discrimination taking place, or if you are experiencing discrimination, let others know that you are aware of what is happening. This is often enough to stop discriminatory practices. If it is not then leaving the immediate area and reporting the discriminatory practice is usually the safest option. The Sex Discrimination Act 1975 protects individuals from being discriminated against in employment, vocational training, education, the provision and sale of goods, facilities and services, premises and the exercise of public functions due to sex/gender. The Equal Pay Act of 1970 mandates equal pay for equal work. If it is believed that these Acts (and/or their amendments) have been breached then going to court is one way of reporting and hopefully ending sexist practices.

Reporting sexism to local authorities is another method of calling attention to inappropriate practices, particularly if sexism is experienced while receiving health or social care. Finally, reporting sexism to organisations working for equal rights may also help to eradicate such behaviours. The Equality and Human Rights Commission and the Women and Equality Unit are both organisations that strive for equality and fight against sexism in the United Kingdom.

Though it is not right, it is often left up to the individuals who recognise discrimination such as sexism to educate others about why these practices are inappropriate. Often educating others about the meaning of sex/gender is the first step in this process since it allows others to see that people of both sexes/genders are equally able and have much to offer. If this is not enough to stop sexism then educating others about the law and the consequences of discrimination – particularly if it pertains to their freedom or livelihood - may get them to stop their discriminatory thoughts or practices. If not, reporting discrimination and getting authorities involved will hopefully cause sexist practices to cease even if it might not change the perpetrator’s attitudes.

Discrimination due to sex/gender is both inappropriate and illegal, but sadly it does still occur. Confronting individuals about their thoughts and actions, reporting discrimination and educating others are all ways to confront sexism when it does occur.

Sexism in the Classroom
Share Your Story, Join the Discussion or Seek Advice..
[Add a Comment]
Have worked on fixed term contracts for 11 months. Applied for what is effectively my job with additional responsibilities and told I didn't get job,not because of my work or suitability, but because they want a new dynamic. The person who got the job is male. Both jobs have been filled by en.I know our workplace is predominantly female at present but I have been told my work is not in question. Do I have anywhere to go with this?
szr - 27-Jun-14 @ 11:52 AM
I have just started a new job - ironically as a Trade Union official with a Scottish Teacher's trade union. My line manager is foul-mouthed. He swears continually. Using unacceptable language and referring to women by a foul name more commonly used as a derogatory term for female genitalia. He has made numerous racist remarks. I.e. he hates the Japanese; he hates blacks.I am new. I tried saying 'I don't believe you said that' then 'I find that offensive and insulting'. This has had the opposite effect. He thinks I am a prude. States that he is just joking. He uses sexist innuendo - referring to getting his leg over and 'shagging'. The other woman collides in his behaviour. Shd actually said he was a good guy - harmless - he did his wife's cleaning and even went shopping with her. As if any of that is remotely relevant! She then advisedly that 'everyone has prejudices - and if I thought about it then I would realise I had them too'. The overall manager (General Secretary) is currently under investigation - she is called a 'c*nt' by my manager. I have no one to turn to. I cannot believe that a trade union is sheltering this behaviour. I want to resign - but am angry that I will be the ond who loses. Is there anything I can do?
Ystewart - 18-Aug-12 @ 11:08 PM
Hi I work within the construction industry and everyday at work I am coming across comments such as "your just a woman, they need a man to solve this problem" "Can I speak to a man to order as he is more likely to understand me" I am told by my boss that it is all harmless fun but it is getting worse, what can I do? jules47
jules47 - 21-Jun-12 @ 1:47 PM
My coach at sport is extremely sexist. All the girls and some other coaches are too scared to say anything but how can we get it to change?
Sunshine - 15-Jun-11 @ 9:33 PM
Title:
(never shown)
Firstname:
(never shown)
Surname:
(never shown)
Email:
(never shown)
Nickname:
(shown)
Comment:
Validate: